A historical beginning has happened with the inauguration of providing Comprehensive HIV services to the Key affected population of HIV, such as the People who inject drug-PWID, from the Government hospitals in Dinajpur. It began in the two centers, firstly in 250-bed general hospital in Dinajpur, then in Hakimpur Upazila Health Complex in Hili in July 2022. CARE Bangladesh consortium partner Ashokta Punarbashan Sangstha (APOSH) APOSH, a self-help group of former drug users, will operate these two centers. Many local newspapers in Northern Bangladesh widely circulated this news. A total of 12 service centers of the PWID project of CARE Consortium are planned to be integrated with Government health facilities by December 2023.

CARE Bangladesh Consortium arranged a high-level visit for the Additional Directorate General and other Directors, National AIDS Program (ASP) under the Directorate General of Health Services (DGHS) in late 2021. The visit happened at one of the integration areas in Dinajpur 250-bed General Hospital and Hakimpur Upazila Health Complex in Hili, Dinajpur. During the visit, the high authorities from the DG health office guided the local health administrators such as the Civil Surgeon, Hospital Superintendent, and UFHPOs to allocate spaces/rooms in the hospital premises for comprehensive HIV AIDS Services to the injecting drug users.

CARE provided constant support to the effort by coordinating with the DGHS and ASP and involving them in the integration process; as a result, these authorities issued letters in favor of CARE to initiate the services in the mentioned hospitals. Furthermore, CARE worked with the government and engaged different departments and authorities. Finally, a recommendation letter was issued from the DGHS in May 2022 in favor of the CARE Consortium to allocate spaces for the PWID services from Government hospitals. 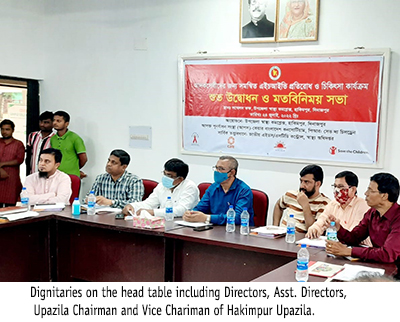 Out of the total 12 centers, two of them were inaugurated on July 23 and 24, 2022, in the presence of the Director and Line Director of AIDS Program, other Directors, ASP of DG-Health, Civil Surgeon, Hospital Superintendent, Departmental Heads, UFHPOs, Upazila Chairman, Vice Chairman, Press Club Presidents, Media, Director of Health Program from CARE Bangladesh, Chief of the party from HIV Sector, Save the Children, Executive Directors from APOSH, and more.

This is the first time that any Key Population for HIV (PWID, Sex workers, MSM, and Transgender) services have been integrated with the Government health facilities with acknowledgment from the Government. It’s an outstanding achievement in CARE Bangladesh’s 25-year-long legacy of HIV Programming. CARE Bangladesh is humbled to be a continuous partner of choice for the Government in this effort to serve one of the most marginalized and stigmatized communities.