How many years can one stay in the same workplace? Some would say five; some ten. A few may boast about completing 25-year mark at one place.

Today, let’s learn about someone who aced any such milestones. Jasimuddin Biswas, has completed his 40-year long journey with CARE Bangladesh. You saw it right; it indeed is 40 YEARS!

When asked about how this long journey began, he said –

“Before joining CARE, I used to work in a local organization in Barisal many years back. I was paid well compared to the workload. I almost did next to nothing yet I was receiving payment with other facilities. That’s why, it didn’t feel right to me. I was young and hardworking in nature so I wanted to do something for the people. I wanted to do some good work and then ‘earn’ the money.”, he said with enthusiasm and determination.

Jasimuddin first came to know about a CARE vacancy through a friend; and that’s how his CARE journey started on 5 December 1980. He joined the Administration and Transport 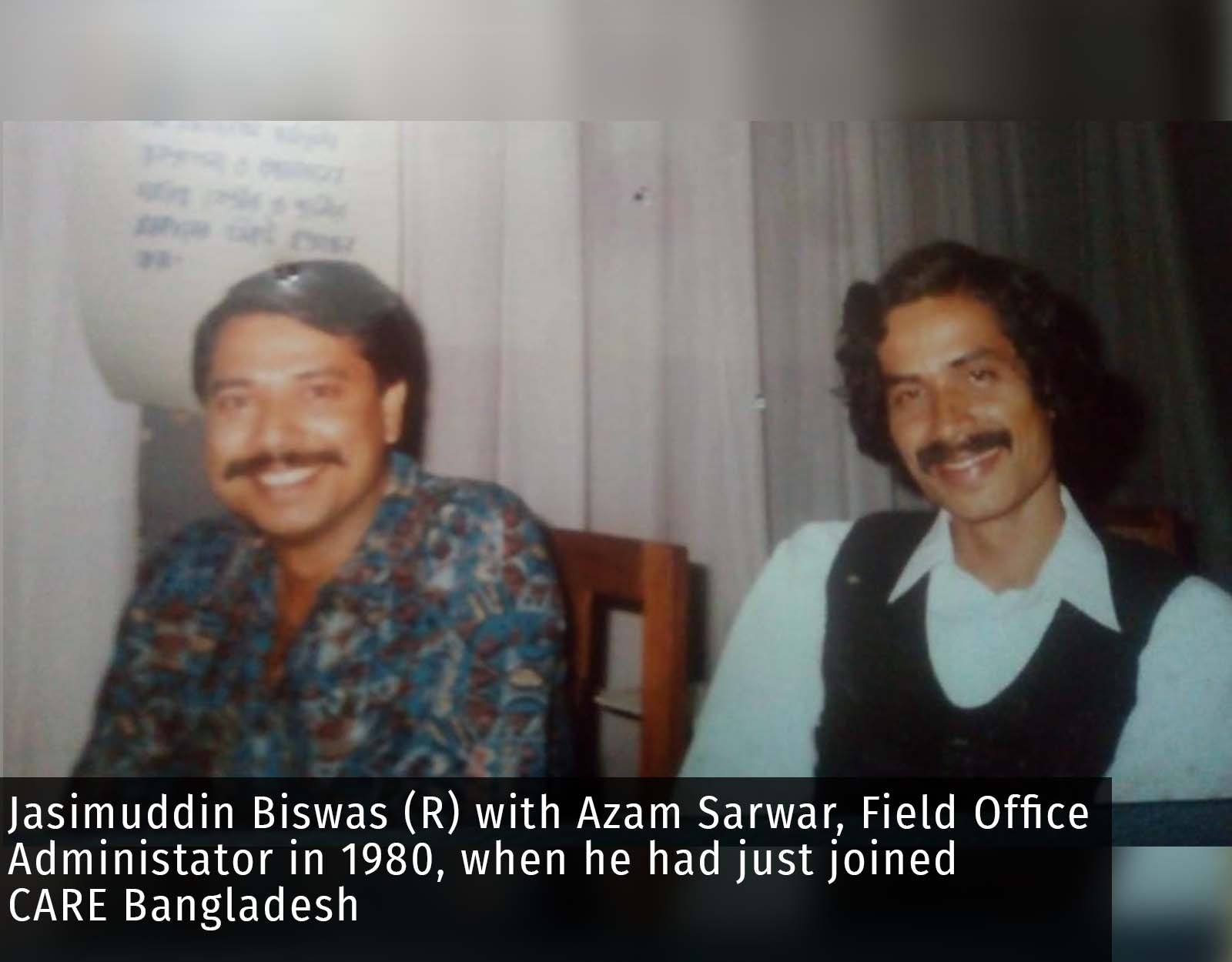 Department as Workshop Assistant. “The salary was not much but I had transport and medical allowance. I decided to start and finally felt like I was earning something through hard work.”

While reminiscing, Jasimuddin could still vividly recall the joining day. The then Transport Coordinator, D.C. Hallway, welcomed him with a warm hug and asked him one single question - “Can I trust you?” The trustworthy, honest and ever sincere Jasimuddin took this notion of trust as a lifelong mantra to move ahead; and never looked back.

He hardly ever truly weighed on the gains and losses in his job. He always felt he was doing something for the people in need. That was his motivation.

When asked about some of his key moments, he mentioned a number of foreign visits and assignments, and to be able to serve people as part of an international emergency support. He mentioned sincerity, punctuality and dedication as the key takeaways from his chequered career.

Just like every other human being, Jasimuddin has a mixed bag of fond and not-so-pleasant memories. However, he prefers to share only the good ones as he is an optimistic person. He believes reflecting on the brighter sides can liven up our lives in ways more than one. He recalls one particular assignment in 2004, when he was leading on the ground, the distribution of pure drinking water across various flood affected areas in Bangladesh.  He and his team worked day and night to support the people for nearly a month.  After that the team got drained entirely; yet they glowed with pride and contentment.  “Despite working round the clock, it felt great that we were able to support hundreds of flood-affected people.”, Jasimuddin added with his usual smile. 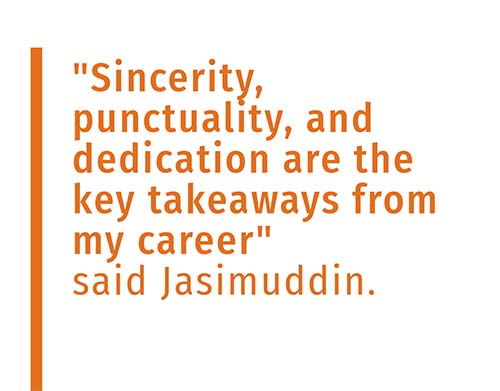 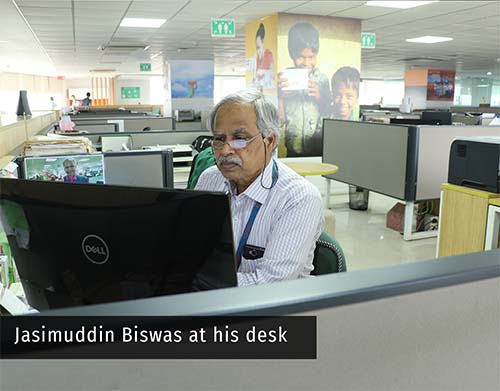 During his time off work, Jasimuddin loves to spend time with his family. He jokingly shared that, Mahmuda Begum, his wife used to tease him that he spent more time loitering and chatting with colleagues than do real work!   However, the pandemic exposed the real picture to Mrs. Biswas. During the lockdown and home-office, his better half finally got to witness the level of difficulty and the challenges associated with his day-to-day work.

In his leisure time, he likes to catch up on the news, watch old drama series, and do gardening with particularly with his younger daughter, Fatima Tuz Johra, who is very passionate about gardening, and currently doing Masters at Dhaka University. His elder daughter, Jobaeda Amena, is now happily settled with two children, 7-year-old Nabiha, and 4-year-old Abdullah.

During the pandemic, despite having high risks, Jasimuddin traveled to many different offices to get things moving “Perhaps I am one of the very few who attended office so many times, during the lockdown!”, he added with his usual gentle smile. 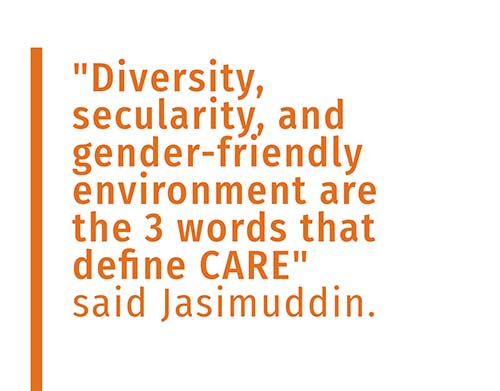 It certainly takes a great deal of motivation to work with the same organization for years. When Jasimuddin was asked about his motivation, he mentioned the work environment and the trust he gained from his co-workers. He also thanked his family for their continued support which allowed him to dedicate so much of his time for CARE.

When asked to define CARE in 3 words, he replied, “Diversity, secularity and gender-friendly environment are the most notable ones. CARE nurtures a culture of diversity, allowing people to work, learn, and grow in their own capacity. The organization does not discriminate against any staff. This is a place where one can work independently, without feeling pressurized or questioned in every step.”

When asked about the most difficult times of his life, he unequivocally mentioned the ongoing pandemic. To him, this is unprecedented.

“Throughout my career, I have faced many uncertain and difficult times. But I always kept going. There were many ups and downs, but I never let anything affect my work.” added Jasimuddin.

For the past forty years, nothing could stop Jasimuddin. Perhaps nothing will.

We salute this extra-ordinarily dedicated colleague for spending over 40 years of his life with CARE Bangladesh.