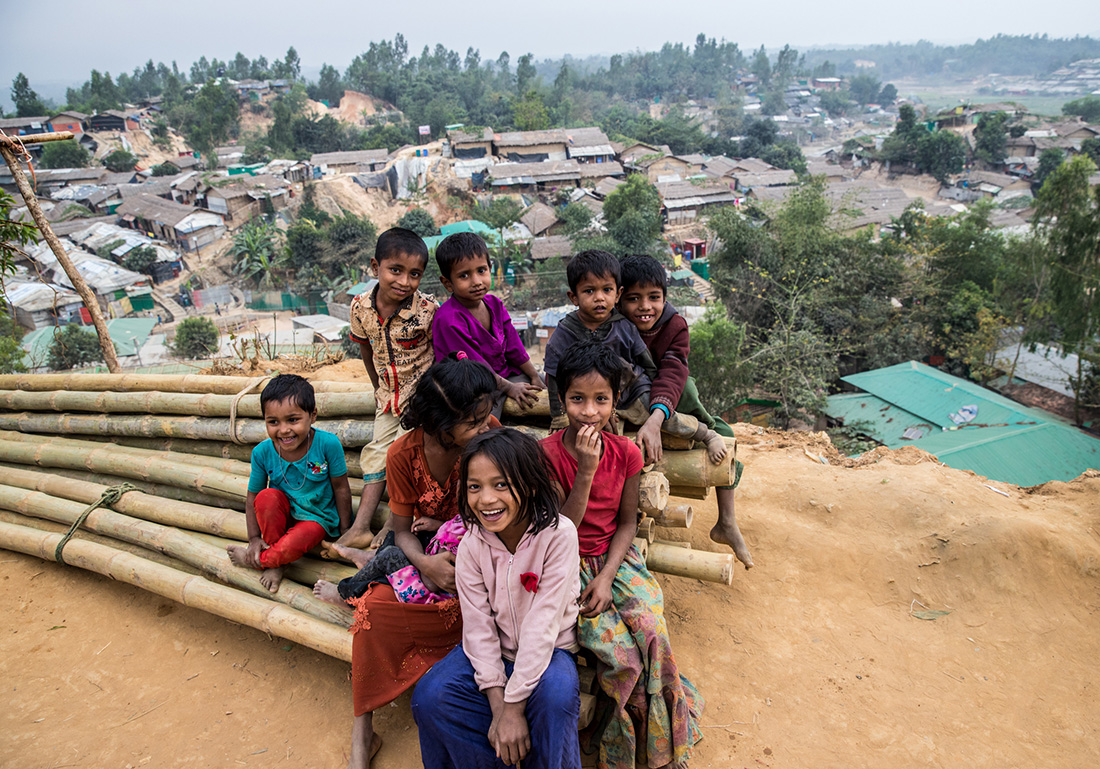 24 August, 2020
ONE THOUSAND DAYS OF HOPE AND COURAGE: Rohingya refugees still at cross-roads

Written by Ram Das, Deputy Country Director, Humanitarian Response, CARE Bangladesh There are places on earth where human induced conflicts have persisted for decades. In other areas millions suffer due to pandemics, climate change and natural disasters. All these have resulted in the devastation and displacement of millions of lives. And in 2017, hundreds of thousands of Rohingyas fled Myanmar...Read more 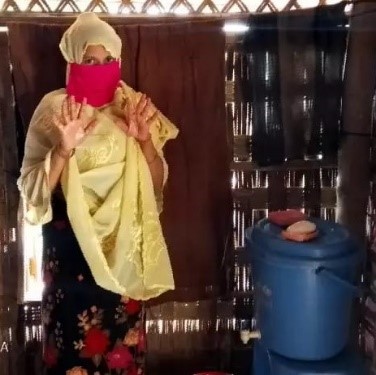 Tasmin said “In Myanmar we were a happy family and we were not struggling with poverty. My children were in school and would play with their friends. There was land to grow crops on and domestic animals. My days would be filled with household chores and farming duties. On the 25th of August, 2017, the Myanmar army burned down our villages and everything else we owned. We had no choice but...Read more 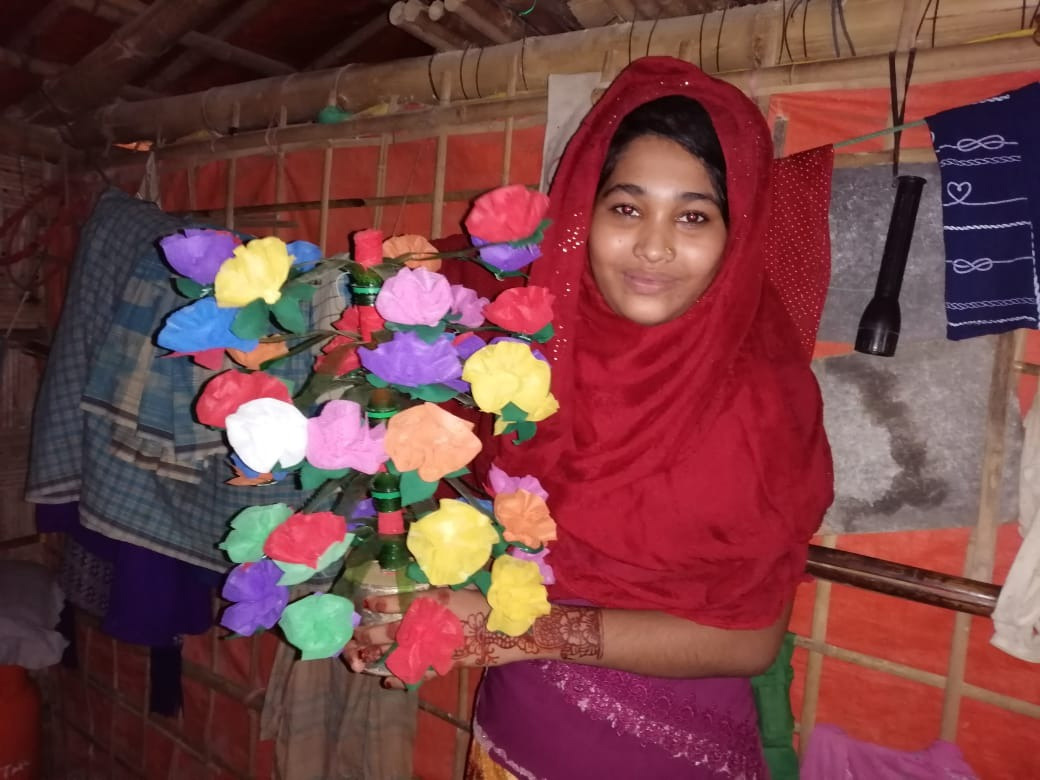 24 August, 2020
Amidst all adversities, Rahama sees the bright side of life

Rahama is 14 years old now and being the oldest amongst five siblings, she has a lot of household responsibilities now. Instead of going out to school or outside for work, she mostly stays in and takes care of her siblings. Her life changed drastically since she started menstruating. Her parents have put limitations on her movement since; not letting her go to school or the Shantikhana (Women and...Read more 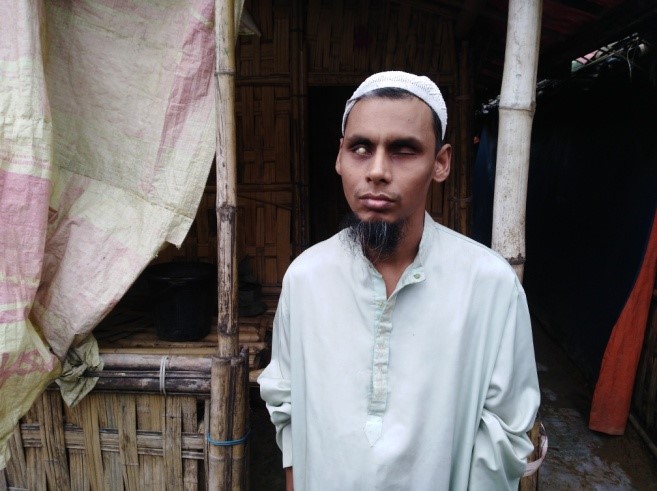 Bashir Ahamed (17 years old) is visually impaired. He lives in block D-3 of camp 16. In the month of July, 2019, CARE Bangladesh constructed an accessible latrine near his house for him. This new latrine has lessened a lot of Bashir’s difficulties. Before, due to his disability, every time he needed to go to the latrine, he would have to ask his mother for assistance. It would make him feel...Read more 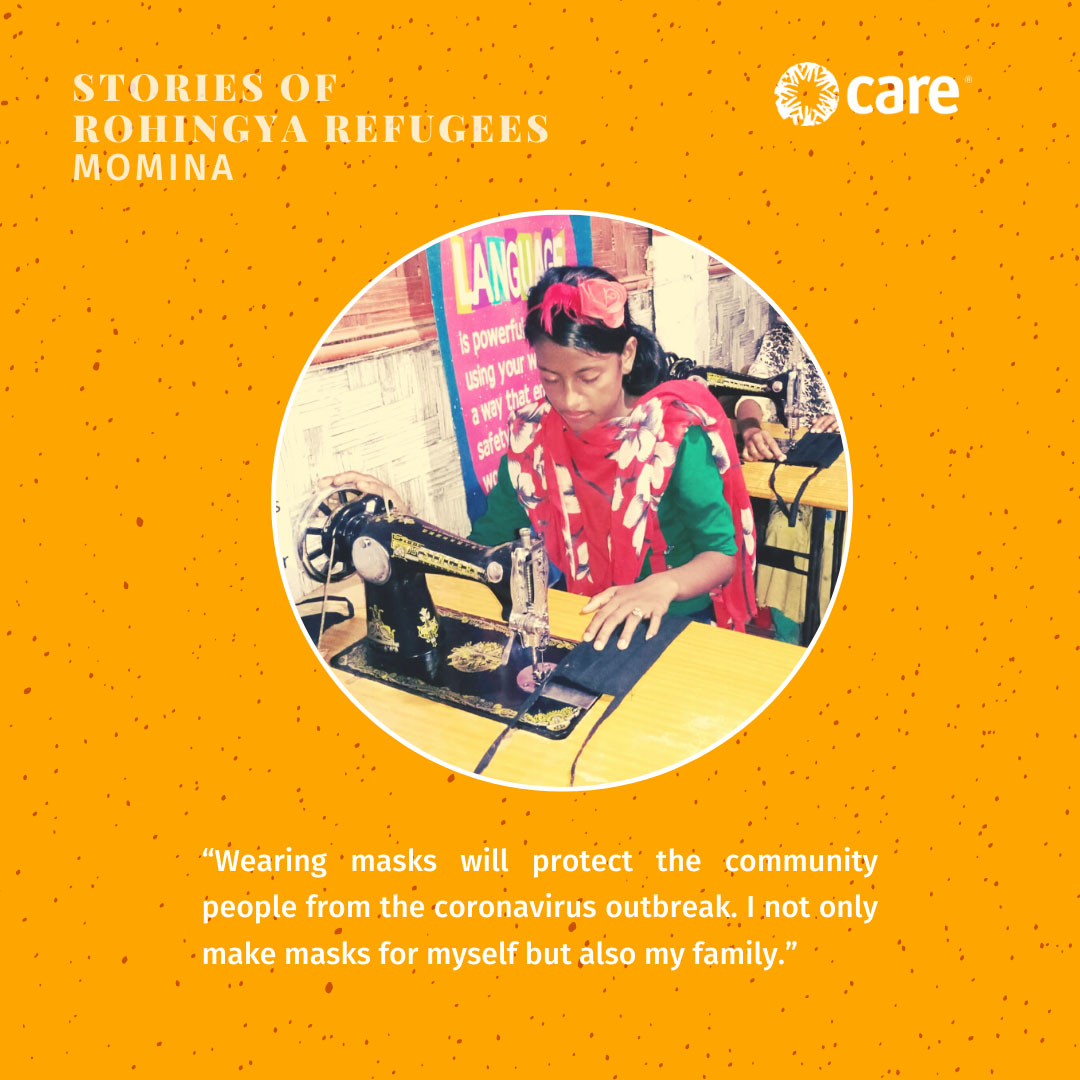 Momina* lives in camp 16, and is a member of the Community Outreach Adolesents Group (COG) committee. She uses the sewing machines at Women and Girls Safe Space (WGSS) to make cloth masks that is essential amidst the COVID-19 outbreak. She encourages others as well. Momina said, “Wearing masks will protect the community people from the coronavirus outbreak. I not only make masks for myself...Read more

25 April, 2020
Heroes are made in times of crisis: CARE Cox’s colleagues lead the way

by Ram Das Ayesha Siddika has been working tirelessly for last three weeks, moving from one community group to another in the Rohingya camp at Cox’s Bazaar in Bangladesh, which wears a deserted look as people are indoors and do not crowd common areas. Her family is naturally concerned but she goes on undeterred. Her focus is very clear – the Rohingya community needs to stay safe as...Read more 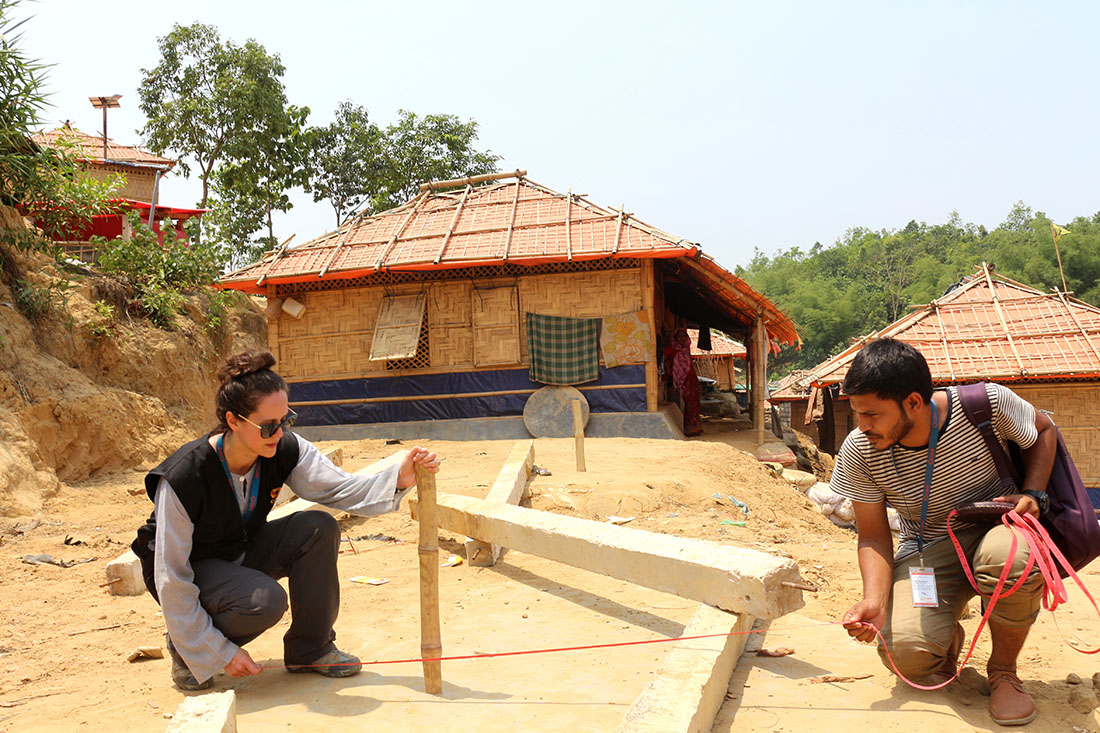 “Here, we have six seasons,” explained the Shelter Program Manager, Shah Suja, as we raced along the road that connects Cox’s Bazar town to the south-eastern tip of Bangladesh and the border with Myanmar, in places a mere two kilometers away. With the sun rising over what is proudly proclaimed to be “the longest beach in the world”, we were passing fields covered by...Read more 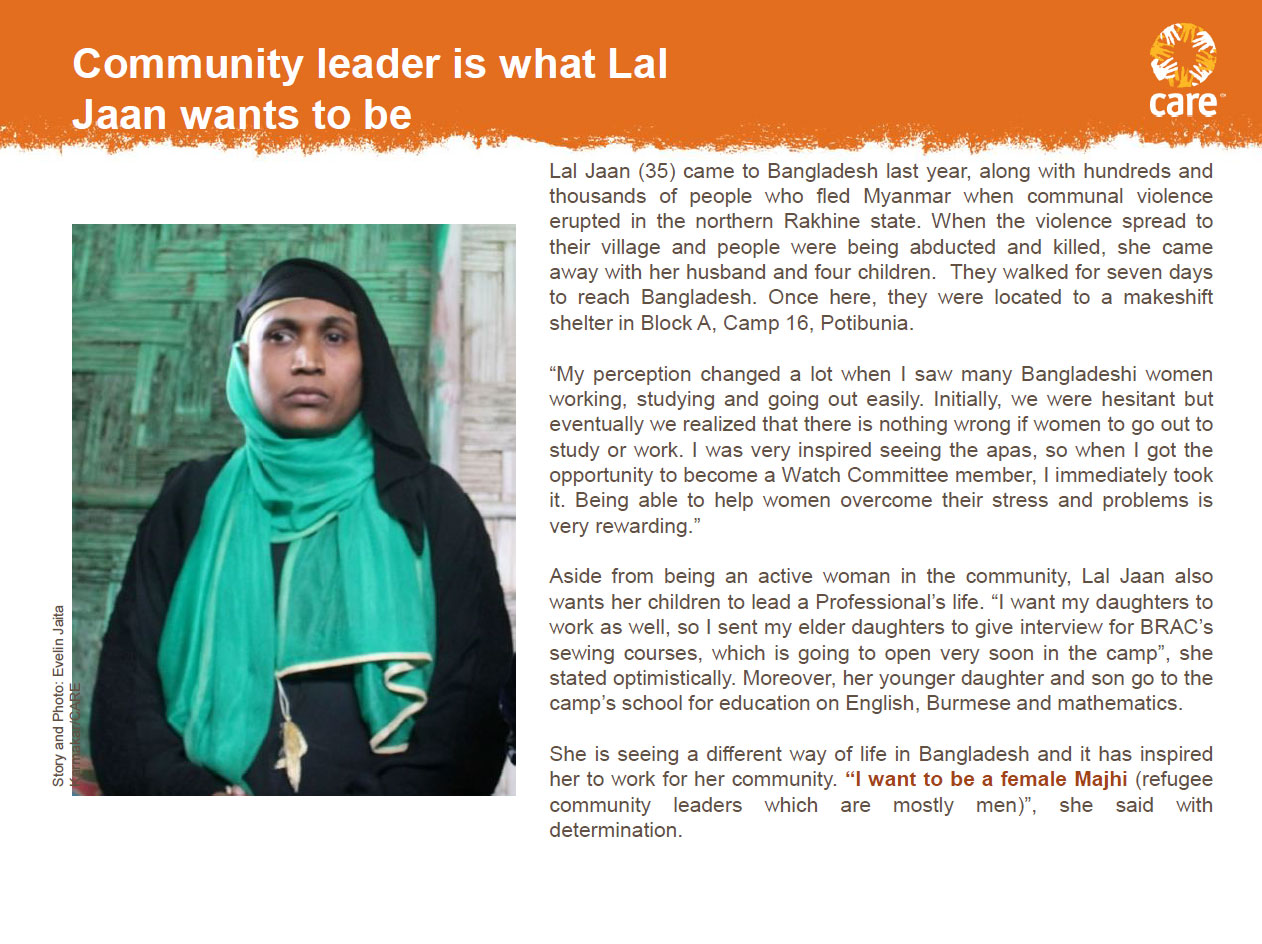 Myanmar was their own country; but even in their own country they did not enjoy freedom. The limitations were even more for women and girls. Seeing the aid workers in Bangladesh, a lot of whom are women, the refugee women are starting to think differently; they are inspired and wants to work for a better...Read more 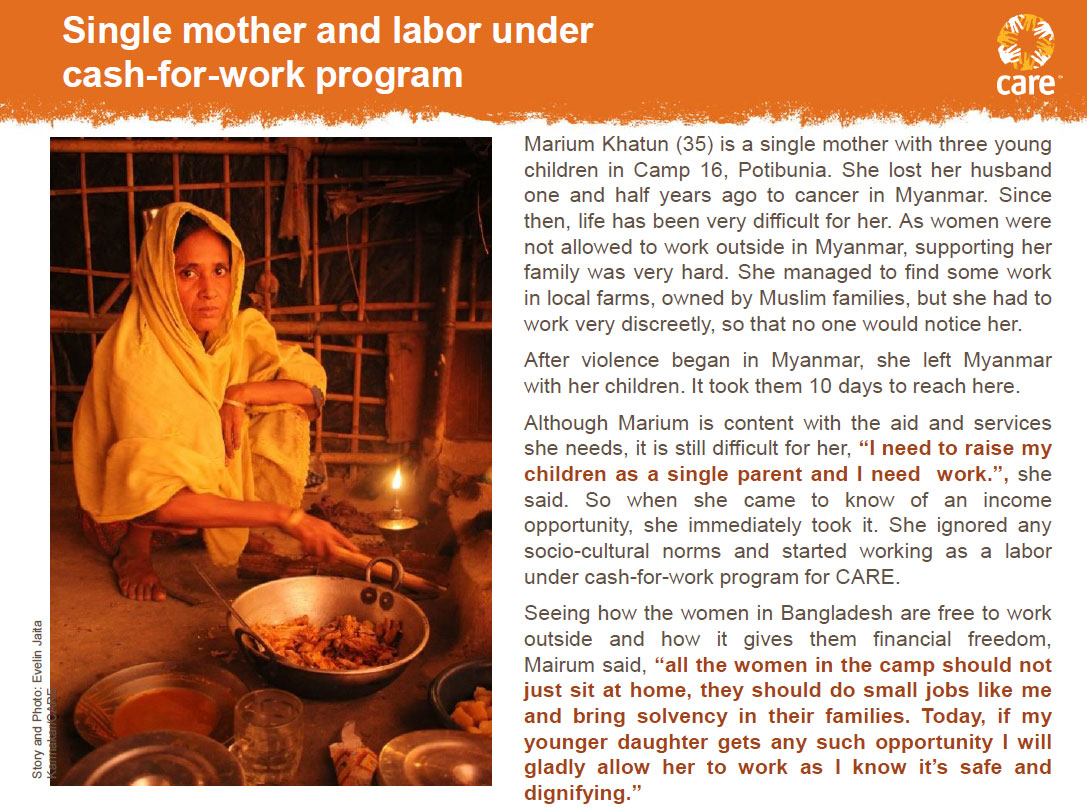 A majority of the Myanmar refugee population is women and children. Most of these women suffered terrible fate, losing their husband, family and children. In the face of distress, these women are learning to be strong individuals who are supporting their family and...Read more

"By Nusrat Daud Pritha" It was drizzling and a group of men and a few women are cutting and adding mud to pave a walkway    from one block to another. During the monsoon rains, many of the walkways in the refugee camps in Potibunia, Camp 16 either became inundated. Omar Faruk and others are working to elevate the old walkway. He fled Myanmar along with two of his brothers and a...Read more

"By Nusrat Daud Pritha" It was very hot all day. Butthanks to the little rain, the weather became fairly pleasant around late noon. Most of the aid workers were wrapping up their work and the men were gathering around in the local tea and paan(betel leaf) stalls to spend the rest of their afternoon chatting. In the refugee camps, it is not uncommon to see a group of men gathered in a shop,...Read more

"By Nusrat Daud Pritha" Carefully and quite meticulously, Noor Kajol was molding a flower with play dough at one of the CARE operated Women Friendly Spaces (WFS). This is her third stop for the day. In the morning she goes to a Madrasa to study Arabic and then goes to an NGOschool in the camp. She visits the WFS almost around noon and stays here until she goes home for lunch. Visiting the WFS...Read more

"By Nusrat Daud Pritha" Hot, arid, humid, muddy; the situation in the Myanmar refugee camps in Bangladesh change drastically in a day. It changes so rapidly that it is hard to tell there were pouring rains even 20 minutes ago. In the land that is marked by blue, orange and white make-shift shelters, most of the men and children are outside their houses during day because the temperature within...Read more

"By Nusrat Daud Pritha" Fatema arrived in Bangladesh with her husband, two children and her seventy-five year old mother. From day one, toilet facilities were a major problem across all camps includingin Block D4 under Camp 1W where they all live. The toilet facility they had was built by themselves with bamboo, ring-slab and tarp. It wasn’t exactly a good facility, but it was better...Read more

"By Nusrat Daud Pritha" The hustling-bustling main avenue of Camp 12, what is now popularly known as Bazar Road, houses one of CARE’s four health centers.Each center is equipped with one medical officer and twoparamedics; all female, that can cater to over 100 patients a day. Health services from SAFPAC,and GSK funded health centers began in the camps in late October. Initially, many...Read more

"By Nusrat Daud Pritha" Children born is Myanmar’s Northern Rakhine state often had very limited access to health services. Most of the infants and children suffered from severe malnutrition on their journey from Myanmar to Bangladesh. Ajida is born into the refugee camps; but this two-month-old is healthier than most other children in the camps. It rained all morning. Anwar Begum was...Read more

“Here, we have six seasons,” explained the Shelter Program Manager, Shah Suja, as we raced along the road that connects Cox’s Bazar town to the south-eastern tip of Bangladesh and the border with Myanmar, in places a mere two kilometers away. With the sun rising over what is proudly proclaimed to be “the longest beach in the world”, we were passing fields covered by...Read more 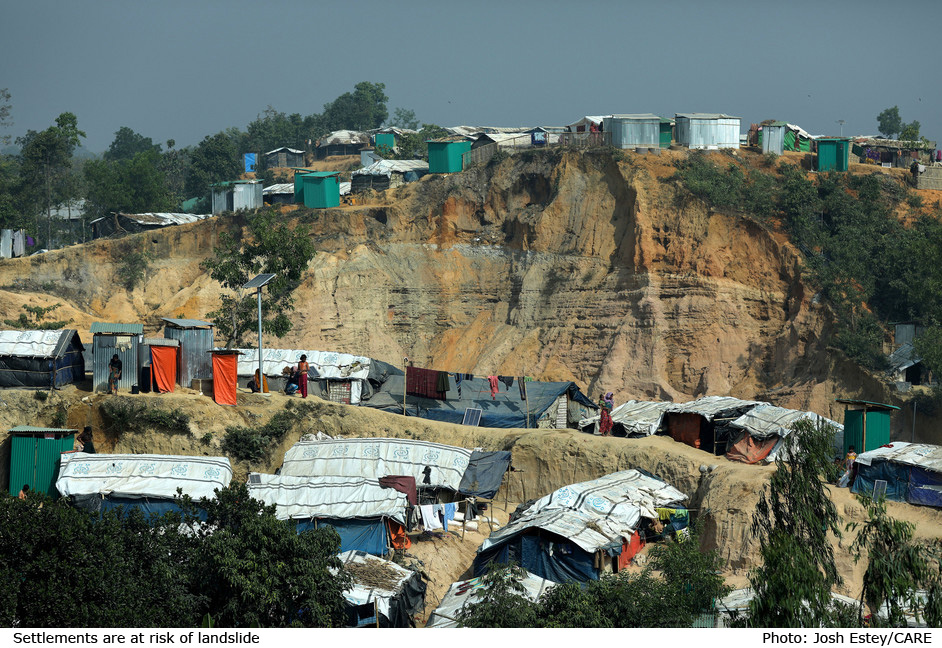 Sally Austin, Head of Emergency Operations, CARE International writes about her recent visit to the refugee camps in Bangladesh A week ago I was in Cox’s Bazar refugee camp in Bangladesh walking up hills of exposed sandy soil covered by endless bamboo and plastic huts that over 800,000 refugees from Myanmar now call home.  This camp has been referred to as one of the densest in the...Read more In a series of camps hosting more than 900,000 people, the border between Bangladesh and Myanmar became the site of the world’s fastest growing refugee crisis since August last year. Over 680,000 refugees made the perilous journey from neighboring Rakhine State in Myanmar into Bangladesh in just six months. The concentration of refugees is now among the densest in the world. Out of those...Read more

06 March, 2018
The Things Refugee children found in the camps in Bangladesh

They had to leave everything behind, including a bit of their childhood. Some of them were dragged outside their homes as their villages started burning, other ran into the jungle to hide and many of them had to trek for days by themselves, having lost their parents. About 40 per cent of all refugees in Bangladesh’s camps are children. Most of them have three things in common: a traumatized...Read more

"By Nusrat Daud Pritha" The hustling-bustling main avenue of Camp 12, what is now popularly known as Bazar Road, houses one of CARE’s four health centers.Each center is equipped with one medical officer and twoparamedics; all female, that can cater to over 100 patients a day. Health services from SAFPAC,and GSK funded health centers began in the camps in late October. Initially, many...Read more 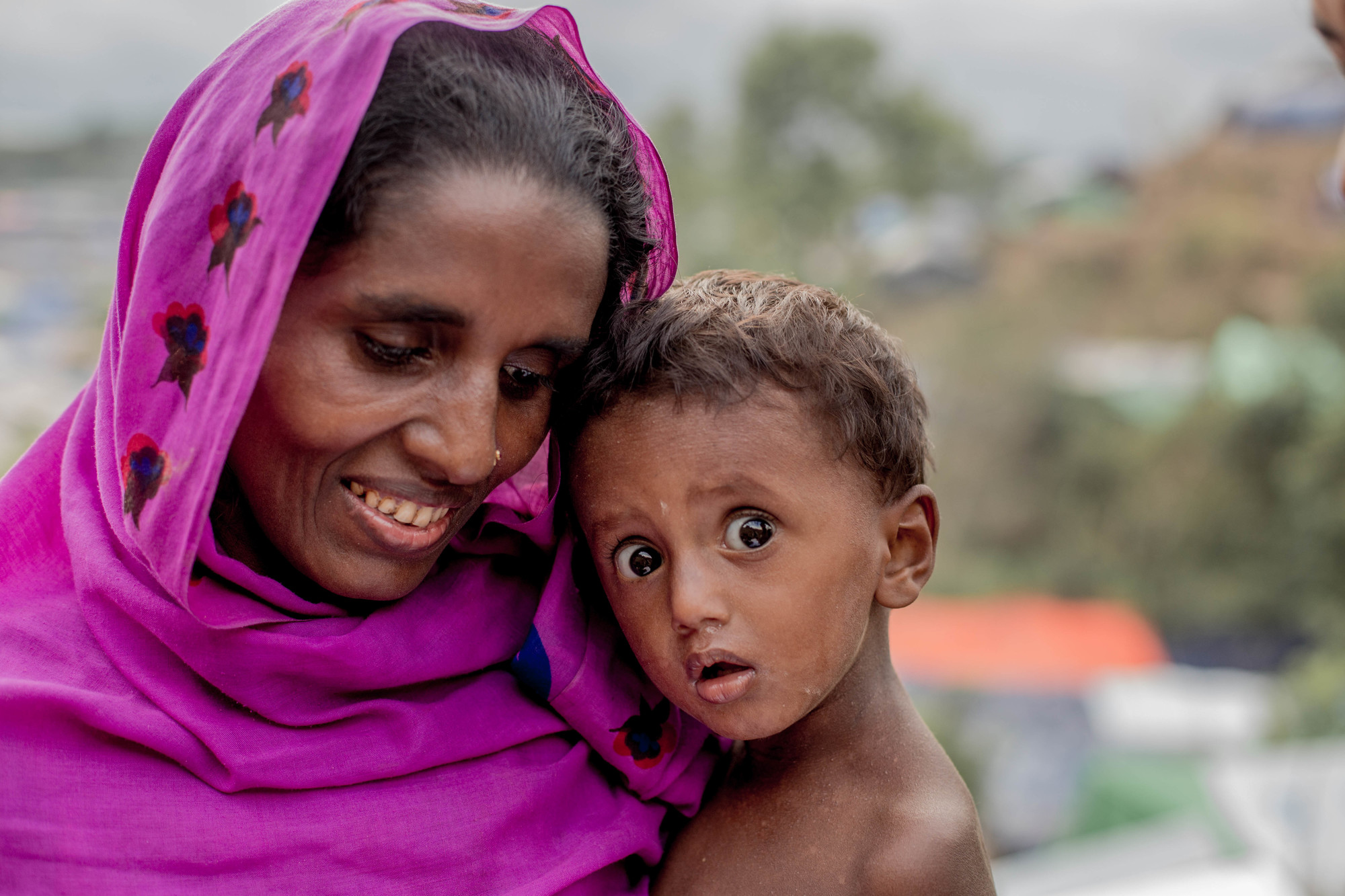 Kulsoma lives in a makeshift shelter in Unchiprang refugee settlement. Kulsoma is 30-years-old, married and has five children. Her children are: Asma who is nine-years-old, Mukkar who is six-years-old, Shahita who is five-years-old, Toslima who is two-and-a-half-years-old (not present at time of interview) and Omar who is 18-months-old. Kulsomaâs story in her own words âAfter four...Read more 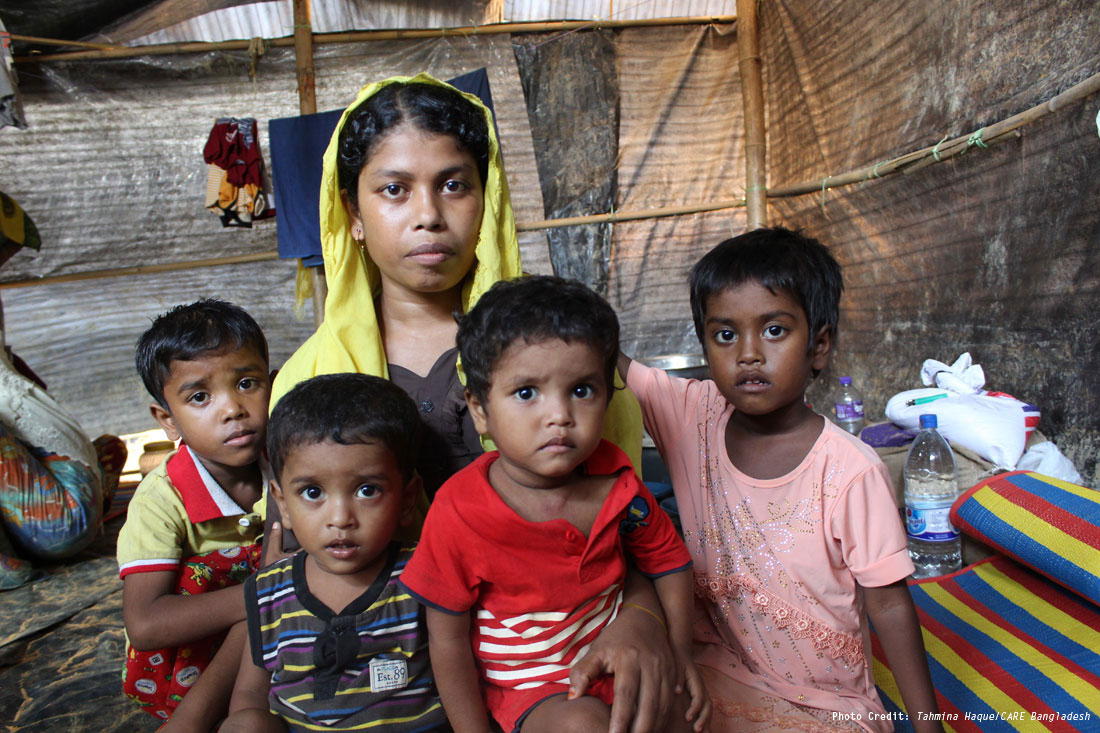 Your partner is shot right in front of your eyes...he falls down...cries for help BUT you don't stop. You continue to run...run breathlessly...until you're far...far away from your bleeding partner... and you still don't know if your partner is dead or alive.. This is what happened to Ayesha (22) from Myanmar. She was sharing her tales of horror. IT WAS A REGULAR...Read more